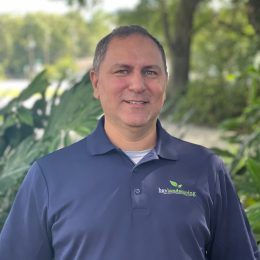 Robert L Stephens was born in Enterprise, AL and his family moved to Mobile at an early age. After graduating from McGill-Toolen High School, Robert studied at The University of South Alabama and Auburn University.

After meeting his wife Melinda, while home for summer, Robert worked in various fields until settling in on the homebuilding industry. After spending twenty-five years in different aspects of homebuilding, remodeling, building product sales and distribution, and millwork sales and production, Robert decided to put his knowledge of purchasing and estimating relationship building, and drive to exceed customer expectations through exceptional customer service, to use for Bay Landscaping Inc.

Fun Fact: In his free time, Robert enjoys spending time with his wife, Melinda, baseball with his son, Nathaniel, and watching his daughter, Loren, grow in her career. He loves Early Bronco's, watching cooking shows, and the occasional workout with F3.