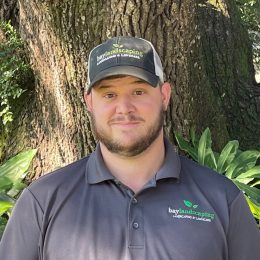 Nick Walley was born and raised in Deer Park, Alabama. This is where his love of the outdoors and all things mechanical began.. Nick grew up helping his grandfather and father as a young man and then years later began working for the Alabama State Forestry Department. Before joing the Bay Landscaping team he was a mechanic for the Mobile County School Board Forestry Department, and has an immense knowledge and skill set that he has brought to Bay Landscaping.

Whether Nick is at home with his wife and two daughters or at work, Nick gives it his all in everything that he does and strives to go beyond the expectations of those around him.

Fun Fact: Nick is an avid outdoorsman from deer hunting to fishing. He is outside year-round and loves passing that passion on to his daughters. When he is not spending time outdoors you can find him with his wife and girls.